PT Marimas is Leading by Example...

The GEA is proud to announce its first Indonesian National Catalyst Company! PT Marimas is one of Indonesia’s most renowned packaged food and beverage companies. Their colourful brands are loved and consumed by tens of millions of Indonesians. Starting as a family owned company, Marimas now distributes all over Indonesia and South East Asia– competing directly with the largest multi-national food corporations.

However, unlike many of their global corporate competitors, Marimas doesn’t just talk about reducing its plastic impact.  They are now fully immersed in deep plastic transition from their CEO to staff, from their packaging to their marketing, from their CSR to their finance. Their recent step forward to commit to the GEA Catalyst Program is a great leap forward for the food and beverage industry.  As one of the most plastic-waste-intensive industries, Marimas’ leadership has massive inspirational potential to prevent thousands of tons of plastic from entering the Indonesian biosphere.

In late 2017, the GEA was contacted by PT Marimas.  Based in Semarang, Indonesia, Marimas’ leadership team had been hearing more and more about the problems of plastic pollution.  They had also heard about the ecobrick phenomenon sweeping the country.  Conscious that the majority of their plastic packaging was non-recyclable, they were keen to learn more about ecobricks and do something about their plastic footprint.  They contacted the GEA and enlisted the senior team for a three day Training of Trainers.

Forty-four ecobrickers from various community groups, schools, universities and Marimas departments joined the workshop at the company’s Semarang Headquarters.  Even the company’s CEO and family joined in.  After an intense and emotion-filled three days, the diverse group of leaderships were convinced: taking full personal responsibility for one’s plastic was their way forward.  The GEA team were blown away with what happened next.

Marimas CEO, Pak Harjanto Halim, was featured on the BBC in 2018 during one of his company's ecobrick community workshops

“I make sure to ecobrick my plastic.  I keep a stick and a bottle in my car so that I am always prepared.  My family used to think I was crazy, but now they are catching on.”

Twice a week, Marimas hosts Ecobrick Starter Workshops at its facilities in Semarang, Indonesia. Schools, religious groups, community groups, and more drop by to learn how to ecobrick from their GEA certified trainers.  When plastic is packed into an ecobrick, it is effectively, trapped and captured.

Marimas and the various community leaders all set about making ecobricks with their personal plastic.  After learning the best practices for ecobricking, the staff went ahead and started packing the plastic that the company had saved up.  With this plastic packed they decided to work together to share ecobricks with other community groups that were keen to take responsibility for their plastic.  Marimas offered their space and facilities and began to host ecobrick trainings led by the trained community leaders and Marimas staff on location at its Semarang head office.   Soon Marimas had the entire year fully booked with an average of two trainings a week!

Over the course of 2018, over 5106 participants attended their workshops and were able to learn how to ecobrick properly. Almost 8,177 ecobricks were made as a result in 2018 alone!  This represented 2.1 tons of plastic secured out of the environment

“We’re really proud to have Marimas on board.  Yes, these guys use a lot of plastic.  However, they’ve made a commitment and are following it through — not just as a side program, but a full company adjustment to take responsibility.  This starts with being honest about their consumption and production and it leads to deep plastic transition.  It’s a long road ahead — one too daunting for most companies to even consider.  However, these guys aren’t just pointed in the right direction, they’re walking it.” 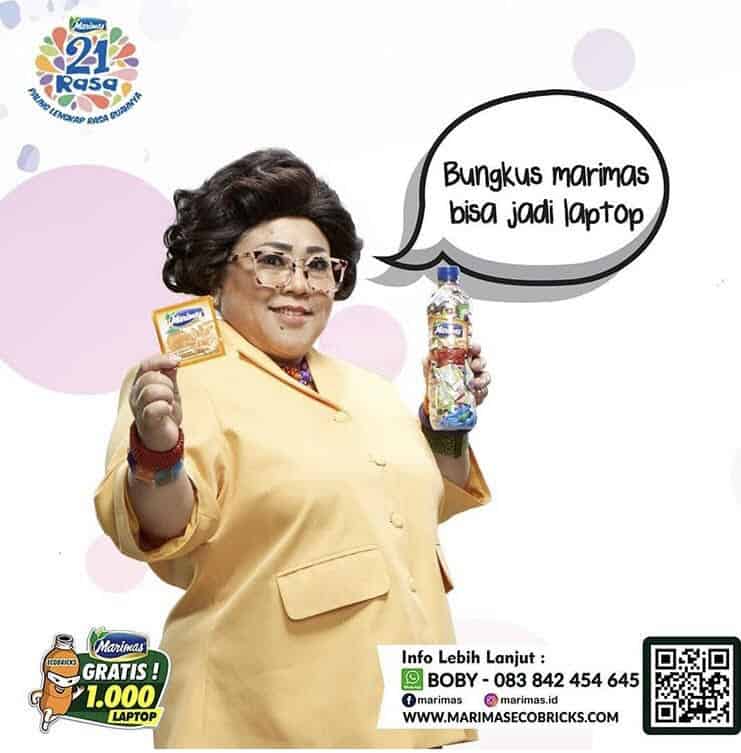 Marimas has also been integrating their ecobricking and social outreach with their core business — including sales, packaging, CSR and marketing.

Marimas has incorporated ecobricks in their marketing campaigns as a way to raise awareness and encourage the ecobricking of their product plastic.

Marimas is following the same path as a company.  They are now systematically focused not just on reducing their plastic production and consumption, but on offsetting this through the ecobricked sequestration of plastic.  All their personal and company ecobricks that are logged on the GEA GoBrik app are counted as “offset plastic”.  In other words, plastic that has been safely removed from the environment.  In addition, the app tracks all the ecobricks made from Starter Ecobrick Workshops that are hosted by Marimas.  These “catalysed ecobricks” (ecobricks that wouldn’t have been made without the help and energy of Marimas) are also counted in their plastic offset.   Thus far this year, our GoBrik system indicates that their efforts have been directly responsible for the packing of two tons of plastic into ecobricks — what we consider the full securing of plastic from degradation.

The second step for companies in our Catalyst program is tracking net plastic production and consumption.  After a careful analysis of their business processes and metrics, Marimas calculated that in 2018 it was producing 152 tons of non-recyclable plastic (~1,824 Mt/year).  Yes, this is a lot of plastic — but far more significant is to have it quantified and disclosed.

Here at the GEA, we’re extremely excited by this courageous and revolutionary step forward by Marimas.

For the first time, Marimas can now calculate its company Plastic Transition Ratio (PTR). This is a powerful new key performance indicator, for companies serious about deep plastic transition. One’s personal or company PTR is calculated by dividing the net amount of plastic produced by plastic secured. Although, Marimas’ PTR is currently small (0.0081) this number has great significance. They are on the score board! They are on their way — and there is now nowhere to go but up.

Ecobricks made by everyone from the CEO to Marimas’ staff to their community partners are logged on the GoBrik app and allocated as a company plastic offset. Ecobricks catalysed by Marimas workshops are also allocated to the offset.

This also sets the bar for other companies in the food and beverage industry who do not yet know their plastic consumption and production, nor have established a PTR.

One of the impediments for such companies to transition from using non-recyclable plastic is that their products and profits are dependent on the usage of cheap plastic.  The price of plastic for packaging is so cheap (there are no penalties or taxes yet in Indonesia for extended company responsibility) that there is no financial incentive for companies to transition.

In this way, Marimas’ PTR also serves as a self-imposed plastic usage penalty.   In 2020, their Catalyst fee (15,000 USD for a National Company Catalyst) will be reduced in percentage to their PTR.  Should Marimas, through cuts in its plastic usage and investments in ecobricking workshops, hit a 1% PTR by the end of the year, they will receive a 1% reduction on their PTR fee. Meanwhile, the fee that they do pay goes direct to the GEA whose mission is the support of local and global plastic transition.

In 2019 Marimas is blasting off to the next level. As an official Catalyst program company, they are focused not just on ecobricking, but the key concepts of plastic responsibility and plastic transition.  We are excited to watch Marimas’ ecobricking activities and companywide transition initiatives take effect this year.

The GEA Catalyst Program allows companies like Ubud Raw to not only take responsibility for their plastic, but to inspire and set an example to follow.  Passion driven companies like Ubud Raw, where the priority is making great organic products, can be powerful catalysts for inspiration and transition in their communities.

Its a small detail, but a big difference!  On all their plastic packaging, PT Marimas now uses the GEA Ecobrickable Designator icon.  This icon is available to all our Catalyst companies to use on their packaging.

The Plastic Transition Ratio (PTR) allows individuals and companies track their progress transitioning from plastic to examples that are regenerative.

What is Plastic Transition?

A bold new key performance indicator that lets you track your Plastic Transition-- the PTR shows one's transition from waste to zero-waste to ayyew!

In 2017, the Ellen MacArthur Foundation  published the following disclosures for companies on their plastic production as measure in Metric Tons:

[sc name="fbbutton"] Retno Damayanti just ecobricked 242 g of plastic in Semarang, Indonesia. Retno used a 600ml bottle to pack 242 g of community plastic to make their number 1 ecobrick. Based in the city of Semarang, Jawa Tengah they are working hard to keep plastic...

END_OF_DOCUMENT_TOKEN_TO_BE_REPLACED

[fbbutton] The community of Marimas Training and Ood Lantip are making ecobricks to go zero waste and build cool stuff. Ood used a 600ml Pelangi bottle to pack 255 g of factory waste plastic to make his number 3 ecobrick. Based in the city of Semarang, Jawa Tengah...

END_OF_DOCUMENT_TOKEN_TO_BE_REPLACED

[fbbutton] The community of Marimas Training and Efriyani Sumastuti are making ecobricks to go zero waste and build cool stuff. Efriyani used a 600ml Pelangi bottle to pack 220 g of factory waste plastic to make her number 2 ecobrick. Based in the city of Semarang,...

END_OF_DOCUMENT_TOKEN_TO_BE_REPLACED

[fbbutton] The community of Marimas Training and Rubi Ah are making ecobricks to go zero waste and build cool stuff. Rubi used a 600ml Pelangi bottle to pack 205 g of factory waste plastic to make her number 2 ecobrick. Based in the city of Semarang, Jawa Tengah they...

END_OF_DOCUMENT_TOKEN_TO_BE_REPLACED

[fbbutton] The community of Marimas Training and umi setiyowati are making ecobricks to go zero waste and build cool stuff. umi used a 600ml Pelangi bottle to pack 205 g of home plastic to make her number 2 ecobrick. Based in the city of Kabupaten Demak, Jawa Tengah...

END_OF_DOCUMENT_TOKEN_TO_BE_REPLACED

[fbbutton] The community of Marimas Training and Herta Rini are making ecobricks to go zero waste and build cool stuff. Herta used a 600ml Pelangi bottle to pack 220 g of factory waste plastic to make her number 2 ecobrick. Based in the city of Semarang, Jawa Tengah...

END_OF_DOCUMENT_TOKEN_TO_BE_REPLACED

[fbbutton] The community of Marimas Training and Siti Khoiriyah are making ecobricks to go zero waste and build cool stuff. Siti used a 600ml Pelangi bottle to pack 220 g of factory waste plastic to make her number 2 ecobrick. Based in the city of Semarang, Jawa...

END_OF_DOCUMENT_TOKEN_TO_BE_REPLACED

[fbbutton] The community of Marimas Training and Henny Tavivi are making ecobricks to go zero waste and build cool stuff. Henny used a 600ml Pelangi bottle to pack 210 g of gathered litter plastic to make her number 2 ecobrick. Based in the city of Semarang, Jawa...

END_OF_DOCUMENT_TOKEN_TO_BE_REPLACED

[fbbutton] The community of Marimas Training and Heni Susilowati are making ecobricks to go zero waste and build cool stuff. Heni used a 600ml Aqua bottle to pack 200 g of home plastic to make her number 2 ecobrick. Based in the city of Semarang, Jawa Tengah they are...

END_OF_DOCUMENT_TOKEN_TO_BE_REPLACED

[fbbutton] The community of Marimas Training and Eka Meylina are making ecobricks to go zero waste and build cool stuff. Eka used a 600ml Pelangi bottle to pack 275 g of home plastic to make her number 2 ecobrick. Based in the city of Semarang, Jawa Tengah they are...

END_OF_DOCUMENT_TOKEN_TO_BE_REPLACED

[fbbutton] The community of Marimas Training and Chafrida Viantika are making ecobricks to go zero waste and build cool stuff. Chafrida used a 600ml Acak bottle to pack 200 g of gathered litter plastic to make her number 2 ecobrick. Based in the city of Semarang, Jawa...

END_OF_DOCUMENT_TOKEN_TO_BE_REPLACED

[fbbutton] The community of Marimas Training and Dwi Hariawan are making ecobricks to go zero waste and build cool stuff. Dwi used a 600ml Pelangi bottle to pack 220 g of gathered litter plastic to make his number 3 ecobrick. Based in the city of Semarang, Jawa Tengah...

END_OF_DOCUMENT_TOKEN_TO_BE_REPLACED

Want to learn more?  Sign up for an account on Ecobricks.org to calculate your own PTR.  Learn more on our new Plastic Transition Ratio page.  And of course, Contact us if you want to take your own company to the next level!

NEXT: What is the PTR?
The GEA Catalyst Program
[DISPLAY_ULTIMATE_PLUS][fbcomments]