Plastic can be Poison

They emulate estrogen which can cause birth defects, cancer and other degenerative diseases

When burned, plastic releases poisonous molecules into the air

These molecules then rain back down onto fields and forests

When plastic get loose in the biosphere they degrade into toxic molecules that eventually reach us, animals and ecosystems causing harm.

Plastics are made from petro-chemicals.   These chemicals don’t fit back into the ecologies around us.  Scientific studies show that the component chemicals are toxic— we know this when we smell plastic burning.

Eventually, plastics that are littered, burned or dumped will degrade into these poisonous chemicals. Over time, when these chemicals leach into the land, water and air, they are absorbed by plants and animals.  Even engineered dump sites are not a solution.  Whether it is ten or one hundred years, these chemicals will eventually seep into the biosphere and affect the local web of life.

There are three main ways that plastics degrade:  through heat, UV exposure (sunlight) and friction.  Unlike waste food or paper, plastics don’t biodegrade, they photo-degrade.  This means that plastics left for years in fields or water will slowly break into smaller and smaller pieces. Eventually these pieces are so small that they are absorbed by the plants, fishes and animals that we eat.

When plastic enters the biosphere it releases toxins, fragments into micro-plastics and emits greenhouse gases that interfere with ecological cycles.

When plastic is burned or incinerated, toxic gases like dioxins, furans, and polychlorinated biphenyls are released into the atmosphere.

Photo-oxidative degradation caused by exposure to ultraviolet  radiation and physical abrasion fragments plastic debris into
smaller and smaller particles, know as microplastics. The degradation process corresponds directly to the amount of surface area of the plastic that is exposed and to the length of time exposed to UV rays.  The majority of non-recyclable single-use plastics are sheets and films with large surface areas and are highly susceptible to photodegradation. This process also emits greenhouse gases, methane and
ethylene.

Increasing scientific documentation is demonstrating the many dangers arising from plastic degradation. Micro-plastics can have toxic effects on ecosystems, accumulate in food chains and cause economic damage because of food safety concerns.  Burned and incinerated plastics have been shown to release dioxins and other chemicals that are harmful to human health. When C02 and greenhouse gases enter the atmosphere they have been shown to disrupt global climate stability.

Meanwhile, current research show a harmful effect of micro-plastics on the health of plankton and zoo-plankton. Plankton ecosystems power the ocean’s ability to sequester CO2. The photosynthesis that power the life and growth of plankton essentially captures carbon dioxide in organic matter. The death and defecation of plankton send this CO2 sinking to the bottom of the ocean where it is sequestered away from the atmosphere for centuries. There is growing evidence that these plankton are ingesting ever greater quantities of micro-plastic debris with potentially significant impacts on their metabolism, reproductive success, and mortality rates. This compromises the ocean’s ability to sequester CO2.

See our Ecobricks & Brikcoin white paper for a full breakdown of the science and source mentioned here.

NEXT: Why Ecobrick?
Get started! Signup

Ecobricks are a deep solution to plastic as they apply regenerative, circular principles.  All GEA ecobrick applications are 100% cradle-to-cradle. 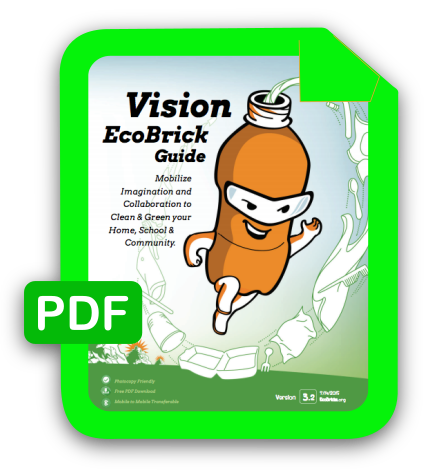 For a comprehensive introduction to Ecobricking download the free Vision Ecobrick Guide.