Pak Agung is passionate about seeing an end to plastic pollution.  After learning through personal tragedy about the perils of plastic, he is determined to see the end of disposable plastic on is island of Bali, Indonesia. 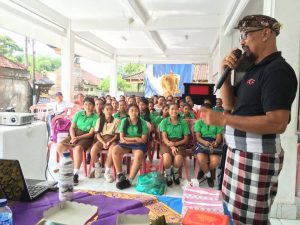 Pak Agung in action talking about plastic and Ecobricks in Abiensemal, Bali.

Bali, a volcanic island in the middle of the Indonesian archipelago, is reknown for its natural beauty and Balinese culture.  The Balinese hindu tradition has made use of the abundant bamboo, wood, and sand stone in arts and crafts for centuries.  Plastic, however, is something new, that doesn’t fit back into the Island’s natural, cultural, or municipal systems.  With capital flowing in from tourism, there’s lots of buying and selling of stuff.  Consequently, there is also lots and lots of plastic.

Pak Agung sees plastic washing up on the beaches around his island and clogging the ditches of his home town of Seminyak.  There, it is common practice to sweep up piles of leaves and plastic and burn them on the street.  Now, with the tourism industry booming, plastic seems to be everywhere these days. 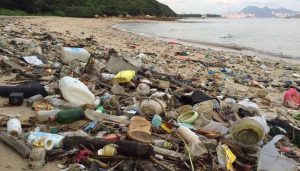 “When I was young, we would play on some of the most beautiful beaches in the world.  Today, the plastic get scattered everywhere.  And now its causing serious problems for my people.”

According to Pak Agung, “My fellow Balinese don’t realize how dangerous plastic can be.”

In 2007, Pak Agung learned through family  tragedy.  His son, afflicted with brain cancer, was brought to the best medical facilities possible in Singapore.  After diagnosing the extent of the cancer, the doctor, trying to figure out where it had come from, had questions for Pak Agung.   One of those questions was to haunt Pak Agung forever: “Does plastic get burned in your neighborhood?”

Pak Agung, founder of the Bali Children’s Foundatin, now travels around the island on his Harley Davidson, helping out parents and children who have also met with tragedy.  Wherever he goes, not only does he bring generosity and help, he also brings his message:  Be careful with your plastics.

At home, Pak Agung is careful to segregate, save and keep clean his plastics.  He makes Ecobricks from his plastic, and from his ecobrick’s he’s made several hexagon modules.  He is planning to revamp his garage with ecobricks one day soon.  “It feels good to imprison the plastic in the bottle.”  Whenever he goes to a school or community, he proudly takes his Ecobrick module with him to sit on and show case. 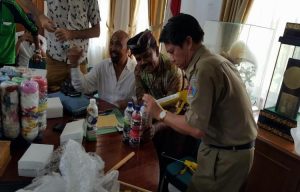 Pak Agung helps the mayor of Klunkung, Bali to make an ecobrick module.

After a presentation to the mayor Klunkung, a large district of Bali, the municipal government mandated ecobricking in every SD (elementary school).  School children make one Ecobrick a month– sufficient to deal with most of their home plastic.

Many street flower gardens in the center of Klunung are made from ecobricks now.  Thousands of Ecobricks, and tons of plastic has been kept out of the local ecosystem thanks to Pak Agung’s advocacy– and the hard word of all the Klunkung students, government workers and more who have been ecobricking.

There’s still lots of plastic in Bali, and much work to be done.  As Pak Agung knows, it’s not an easy road.  But for our health, and the health of our children, its important that we keep on going on the journey. 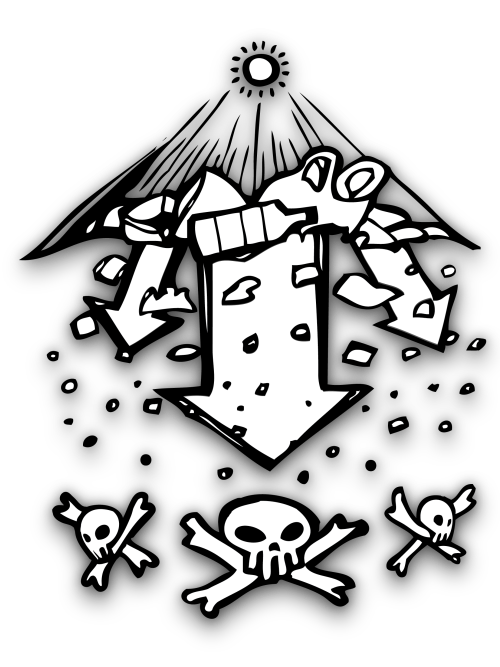 Through sun and water exposure, plastic breaks down into environmental toxins and microplastics.  Packing it into an ecobrick secures it from poisoning the biosphere.

We see a Transition in our Homes, Communities and Companies from Plastic to ever Greener Harmony with Earth's Cycles.