Pak Abdul Rohman is one of our 2017 Ecobrick Earth Heroes.

We met Pak Rohman during our Ecobrick Training of Trainers workshop this September in Jakarta. He sat in the back quietly, but I remember him being particularly attentive. He wasn’t an official attendee– he was the parking attendant of the NU building in which we were holding the workshop.

Determined, he persuaded his boss to let him attend. He sat in for our training whenever he could squeeze a moment between guiding cars and motorcycles. 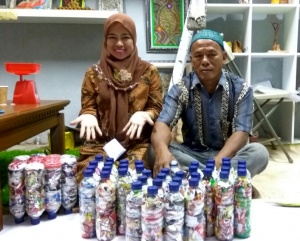 After work every day Pak Abdul segregates, washes, dries, then packs his household plastic into bottles.  Now that that has run out of plastic in his house (he doesn’t consume nearly as much these days) he buys clean plastic from his neighbors. That’s right… He personally buys it! 2000Rp per kg of mixed otherwise unrecyclable plastic that he knows will otherwise be dumped and burned in the community.

Often I hear advice from folks in NGOs, thinking from the capitalist paradigm, who think it will be necessary to buy Ecobricks from people to motivate them. It’s always tricky to explain how money is actually unnecessary hindrance: there are far more potent human motivations than capital gain. Pak Abdul is a great example!

Living in Jakarta, he sees all the plastic that goes through his house, that of his neighbors and the city. It doesn’t take a college degree to see the plastic in the ditch, rivers and dumpsites and know that our supporting ecologies ain’t doing so good. “I started ecobricking to protect the environment from getting destroyed. I am worried about that all the plastic is going to clog the drains and rivers in my community”.

Of the 40 participants at our training, Pak Rohman is the first to submit in his Ecobricks to the Jakarta NU office (I will bring mine in this. He had to park cars during the part of our workshop where we made modules– so here you seem him, proudly logging his Ecobricks into the NUBrick App and learning to make hexagon modules with silicone.

Pak Rohman is hero. Not only has gone not only zero waste, he’s gone negative-waste. “I’ve shown my son how to Ecobrick, and I taught his class and school how to Ecobrick also”.  Every Friday, he hosts an ecobrick party at his house, where he invites his neighbours to pack plastic with him. According to the NUBrick App he has personally packed over 30 ecobricks, a total of almost 10kgs of plastic in the last two months alone.  This amounts to sequestering over 30kgs of C02.  Of course, this isn’t counting all the ecobricks made by the students he has gone on to train!

This is the power of non-capital, mandalic collaboration to incite viral transformative and consciousness raising movements of activated eco-heroes like Pak Rohman.

If everyone flew around on air planes like Al Gore our planet would quickly choke on CO2. If everyone packed more plastic (read C02) than they consumed, like Pak Mohamad, then wow… Pollution would literally be a thing of the past.